You are here: Home1 / The Blog2 / Special Reports3 / EY maintains track record of accurately forecasting and then delivering... 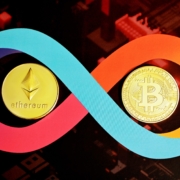 It is difficult not to come away from a Paul Brody dissertation on blockchain more excited and optimistic about the transformative power of the technology than when you went in. Compounding the difficulty with taking a contrarian view of Brody’s assertions is the simple fact that he has been right in his predictions from prior years much more often than he has been wrong. The EY partnership seemingly shares this view based on Brody announcing the firm had committed to investing $100 million into his operation to facilitate making his vision a reality.

“Underneath the business value of blockchain, however, is a rather significant bet to be placed on either deploying public (Ethereum) or private (Hyperledger) blockchains. At the core of this debate rests two issues: the speed of innovation, and the level of security and trust that can be ensured. Innovation, EY argues, happens faster on public networks even if that innovation ameliorates what bad actors inject into the network. In theory at least, even bad actors have a role to play in accelerating innovation by essentially forcing the issues and speeding the time to resolution.” — EY blockchain strategy: Betting on public chains with EY advisory for risk mitigation, April 2018

Recent TBR research focusing on blockchain-based supply chain applications indicates blockchain in this context is in the middle of a trough of disillusionment. Brody outlined this idea by way of explaining what EY chose not to do in the past several years. The enterprise-first mentality was a legacy industry success factor when the cost of compute was the limiting factor on digitizing business activity. Continued commoditization and software abstraction increasingly tilts business purchase criteria from infrastructure to productivity gains that software adoption can bring.

Going for large enterprise operating cost improvements led early large-scale initiatives to bet on private chains such as Hyperledger. It followed, in many respects, the Electronic Document Interchange (EDI) playbook of the 1980s and 1990s, called hub-and-spoke, which netted out that the hub could set the standards and the spokes would have no recourse but to follow suit.

EY cited market survey data it believes indicates that private chain had 0.5 participants excluding the founding entity. Additional survey questions stated that 63% of respondents had concern about getting locked into private chains, while 54% believed their existing supplier and service networks were not sufficiently competitive.

Compare and contrast the rollout and now quiet periods for consortiums such as the IBM-Maersk joint venture called TradeLens that took on the monolithic set of interconnected processes that is global trade, and the EY and Microsoft Joint Venture around Royalty Payments that started small, hardened the technology layer, and now provides tangible reference points as they seek to apply this royalty payment shell to multiple use cases. EY states this tracking system for developer royalty payments for games sold through multiple channels has reduced administration costs by 40% and provided a 99% improvement in traceability, from 45 days to less than four minutes, which has enhanced overall community satisfaction.

EY Global Blockchain Summit 2021: TBR has watched the EY Blockchain events blossom in five years from a small coterie of the curious to an army of the passionate. This year’s event had the usual fascinating presentation by EY Blockchain Leader Paul Brody on the current and future state of blockchain’s market maturity that was then reinforced with detailed, technically nuanced breakout sessions that were repurposing of the internal EY Blockchain education modules.

Will bitcoin become the next gold?
Scroll to top