You are here: Home1 / The Blog2 / Special Reports3 / IBM Z’s relevance will persist in the digital world

Software-defined networking essentially virtualizes the last leg of the three-cornered compute, storage and networking stool. Similarly, the software abstraction makes compute and networking mere workloads on the compute instance. Vodafone’s (Nasdaq: VOD) customer case study at Think 2020 addressed this integrated data and networking construct being delivered from one cloud computing architecture. New terms are now being coined to talk about the various compute form factors rapidly coming into view. Edge computing, edge cloud and fog computing all seek to describe new compute instances being deployed closer to humans and connected machines that will drive economic and social activity in the digital age. A single cabinet Z, therefore, can become the converged ICT install at the department and branch level. Carry out several more form factor reductions, and the concept of Z at the edge does not seem so far-fetched or beyond the realm of IBM (NYSE: IBM) engineering to achieve.

Form factor miniaturization comes to the Z; is Z at the edge on the horizon?

Most people unfamiliar with Z view it as a “behind the glass” monolith in need of air-cooled rooms and water-cooled architectures. Z now comes in standard 19-inch rack cabinets, with the first air-cooled model introduced this year at Think 2020. IBM aims this form factor at SMBs and startups, each of which represents new markets for Z. This design enhancement is the latest of many innovations IBM has brought to the Z architecture in recent product cycles.

Chapter 2 of the cloud, as IBM defines it, will be the unlocking of enterprise data for distribution throughout a hybrid multicloud world. Distributed, ubiquitous computing might flip the axis on the business considerations and technology applications for risk mitigation as the frictionless movement of data among and between enterprises becomes the norm, but it does not signify the death knell of the mainframe. If anything, this new computing architecture requires a virtual custodian and traffic cop for data security and for dynamic identity access and management. Recent design enhancements to the venerable Z architecture, coupled with bringing the Red Hat developer community to Z, have the potential to defend and extend Z’s market relevance far into the future. 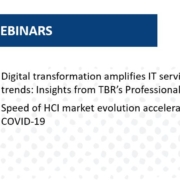 When your car becomes your smartphone, who handles your cybersecurity risk?

IBM and the Raptors: Building an NBA champion and looking for a repeat