You are here: Home1 / The Blog2 / Special Reports3 / Amid rise of Kubernetes as standard in cloud-native deployment, vendors...

While many industry incumbents are taking the fast-paced Kubernetes market by storm, TBR argues the overall market is still in its infancy, leaving ample room for vendors to position their offerings as unique to developer customers. In a room filled with ambitious startups, Humio emerged as a standout due to its enterprise-grade partnership with IBM and impressive scale for a short-lived solution.

Founded in 2016, Humio offers an index-free logging platform for on-premises and cloud environments that processes large data volumes in real time, providing users with greater visibility into both structured and unstructured data. While many competing vendors market public clouds as the home to their streaming technologies, Humio views its on-premises tool as a differentiator given that data challenges, particularly ingestion and investigation, impact legacy customers. TBR believes one of Humio’s distinguishing features is its unlimited pricing plan, which was launched over one year ago. Contrary to a “pay as you scale” model, Humio’s unlimited option flattens the cost curve when customers incur higher data volumes, helping users save on data ingestion and retention costs. While still in its early stages, Humio’s offering, as well as those from other vendors that follow the same pricing model, may end up disrupting the market.

Looking to technology and reseller partners for early entry

An indirect sales strategy is critical for startups, and Humio looks to both technology and reseller partners for success; ahead of the event, Humio entered into an integration and reseller partnership agreement with IBM. IBM now supports Humio’s logging tool on its recently launched Cloud Pak for Multicloud Management — in this instance, Humio’s tool runs as a SaaS offering in the IBM Cloud, where Humio will monitor data health and notify users of issues, all while being simplified for end users via the one-click deployment that the IBM Cloud Paks provide. TBR believes IBM’s backing of Humio’s platform, despite being newer to market, highlights the validity of the technology in its early stages, and we predict that through the IBM Cloud Paks, which are based on Red Hat’s OpenShift platform, Humio will be successful in scaling its offering. 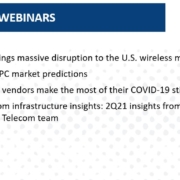 Could cloud cast a shadow over Dell’s bottom line?

With post-pandemic world in sight, 6 IT services, digital transformation and consulting trends emerge

Executive change at Accenture portends changes for the market leader

On Earth, the Economy Is Tanking. In the Cloud, It’s Fine
1 reply