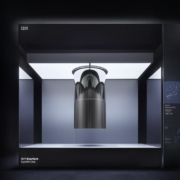 Welcome to TBR’s monthly newsletter on the quantum computing market: Quick Quantum Quips (Q3). This market changes rapidly, and the hype can often distract from the realities of the actual technological developments. This newsletter keeps the community up to date on recent announcements while stripping away the hype around developments.

For more details, reach out to Geoff Woollacott or Jacob Fong to set up a time to chat.

July quantum industry events spanned the full spectrum of the quantum stack. IBM installed its second quantum system internationally with a research center as part of its ongoing collaboration efforts, which are focused as much on skills development as they are on system innovations. Additionally, incremental scientific improvements are occurring across rival technology stacks in the race to achieve fault tolerant quantum computing. PsiQuantum received large cash infusions for its photonics research, Honeywell released papers outlining its high-fidelity single-qubit and two-qubit gates and China outlined a series of breakthroughs that may give analysts pause from a geopolitical perspective.

Lastly, Dartmouth College announced a collaborative research effort on the various materials that can be utilized in the manufacture of qubits. This last announcement, while low in the overall quantum stack, will be critical for manufacturing yields as these rival quantum architectures inch ever closer to viable, economically advantageous systems to apply against real-world intractable problems.

IBM: Big Blue continued its global quantum expansion with its second international deployment of its flagship quantum computer, IBM System One, in the Kawasaki Business Incubation Center, located just outside Tokyo in Kawasaki, Japan. The deployment is part of a 2019 partner agreement between IBM and the University of Tokyo, and is IBM’s second-ever on-premises quantum installation, following the one it completed for Germany’s Fraunhofer Institute in June.

These international deployments should prove advantageous as IBM improves relations with influential organizations, which will allow IBM to tap into their deep academic talent pools. Another benefit of having closer relations with academic and research institutions is the ability to evangelize the technology and skills development needed to grow the talent pool from the roots up, a strategy IBM has supported for years. The company’s partnerships and recent deployments illustrate how it is tactically executing on the early phases of that strategy.

PsiQuantum: This quantum startup came out of stealth mode last year with a $215 million venture capital investment round with notable investors such as Blackrock and Microsoft, which caught the attention of the quantum industry. PsiQuantum, a quantum computing hardware company that is using photonics as its qubits, has the ambitious goal of creating a 1 million qubit processor — a milestone that is expected to unlock the potential of a universal quantum computer.

In late July PsiQuantum announced another colossal funding round with Blackrock and Microsoft as returning investors in its Series D round that net the company $450 million. In May the company signed a deal with GlobalFoundries to house PsiQuantum’s quantum chip manufacturing inside GlobalFoundries’ fabrication facilities. This partnership is critical as PsiQuantum plans to leverage fabrication techniques used in classical semiconductors being produced today. While the company asserts it has customers in various industries and is providing use-case and algorithm identification services, it has had limited means to produce meaningful revenue without a prototype. While development of a million-qubit processor is still a long way out, the investment provides PsiQuantum additional capital to scale its R&D operations while maintaining significant cash runway.

Honeywell: In September 2020 Honeywell Quantum Solutions introduced its latest 10-qubit ion trap quantum computer, System Model H1. Since then, the company has made strides to improve the fidelity of the system and the overall system performance metric created by IBM, called Quantum Volume (QV). When the system was released, it had a QV of 128, and in March the system reached a QV of 512. In July IBM announced it doubled its QV once again, achieving a QV of 1024. The system averaged a single-qubit gate fidelity of 99.99(1)% and an average two-qubit gate fidelity of 99.72(6)%. The company attributed the improvement to techniques involving real-time error correction by creating a logical qubit out of seven linked ion trap qubits.

China: Three papers on quantum computing and communication achievements of physicists at the University of Science and Technology of China were published in arXiv.org, an open-source archive owned by Cornell University that contains pre-peer reviewed scientific papers. One of the three papers reported that the physicists had successfully transmitted single photons over 300km of fiber using quantum dots. A second paper reported an achievement in photonics where scientists were able to detect 113 individual photons using Gaussian boson sampling (GBS), which was an improvement on the 76 detected photons from previous experiments. The third paper discussed an experiment that built on Google’s 2019 Sycamore demonstration, using a 66-qubit superconducting computer. The paper claims that the sampling problem the quantum computer finished was “2-3 orders of magnitude higher than the previous work on 53-qubit Sycamore processor” in computational difficulty.

Since none of these papers have been peer reviewed yet, it is imperative the results be taken with a grain of salt. However, considering the concealed nature of China’s quantum computing developments, the papers provide a window into the country’s progress. With techno-nationalism and geopolitical tensions peaking, there is a likelihood that in the coming months political action will take place in the West in the form of investment as the quantum race heats up.

Dartmouth: The Thayer School of Engineering at Dartmouth College is launching a three-year initiative that will be led by the school’s Engineering Professor Geoffroy Hautier and include researchers from the University of California, Berkeley, and the Lawrence Berkeley National Laboratory.

Funded by a $2.7 million grant from the U.S. Department of Energy, the initiative’s focus is to identify various materials that can be used as viable qubits for quantum computing. There are currently a handful of materials being used — depending on the compatibility of their properties with the architectural framework of the device — to create differing qubits, with the synonymous goal of storing quantum information. Some examples of these qubit foundations include Ytterbium ions (ion trap), silicon atom electrons (spin qubit) and photons (photonic), among many more. Research into the raw materials and those that are best suited for production will provide the long-term benefit of improving manufacturing yields at scale.

Quick Quantum Quips: A call for quantum supremacy sends ripples through the market

Innovation, Amsterdam and an arena: How KPMG teams excel at transformations...

Spending recovers as pandemic conditions wane in the U.S., but competition among...
Scroll to top