At close of business on Jan. 30, IBM unveiled Virginia Rometty was stepping down as CEO. Arvind Krishna, current SVP of Cloud and Cognitive Software at IBM, will take over effective April 6. It was also announced that James Whitehurst, IBM senior vice president and CEO of Red Hat, will become the new IBM president, also effective April 6.

Traditionally, CEOs come from finance or sales and marketing. Finance leaders are tapped when the bottom line is the priority; sales and marketing leaders are selected when the top line is the priority. However, the current market climate presents a different kind of IT landscape. The rapidly shifting requirements and demands from enterprises necessitate a different kind of leader.

Krishna’s presence should assure customers, particularly those with primary concerns around IBM’s product road map and the ways in which IBM will build out the safe, secure and innovative ecosystems components for the new multi-enterprise business networks and company federations. Installing a career technologist at the helm addresses the marketing challenge of countering competitors that rose to prominence in Chapter 1 of cloud computing. Large enterprises seeking to future-proof their investments in Chapter 2 of the cloud, as digital transformation continues to transcend the enterprise, will look to IBM for a well-articulated technology vision.

While Krishna will message to the market, Whitehurst will work on needed cultural change as IBM president

Much of IBM’s recent struggles have revolved around execution, as the organization’s culture and operating practices were misaligned to the prevailing ways of working and innovative best practices that came from native cloud competitors. IBM historically has deployed ROI business case justifications in silos that worked well for transaction selling. This ROI process has to give way to a companywide viewpoint of overall revenue contribution — or lifetime customer value — regardless of which discrete technology assets receive the recognition in the internal accounting process. The two models are not compatible. In purchasing Red Hat, IBM acquired a company with vastly different operating practices that created a sustainable and consistent revenue model based around a free product. Fourth quarter results showing Red Hat’s sequential growth and the traction IBM gained with its Cloud Pak rollouts are leading indicators of the directional shifts these two executives will steward.

In promoting Whitehurst to the role of president, IBM signals to customers, investors and employees that it will be changing its internal operating models to be more like those of Red Hat. Symbolically, this indicates the acquisition was more a merger of equals and should allay the concerns of the broad Red Hat ecosystem of developers and customers IBM has to retain and expand to realize the value IBM expects to gain from the purchase as it takes aim at becoming a share leader in Chapter 2 of the cloud.

Rometty started to write IBM’s cloud narrative, yet with Red Hat now in the mix, the story is far from finished

In many ways, IBM’s true cloud story began once Rometty stepped in to run Big Blue in 2012. Just over a year after assuming the role, IBM acquired SoftLayer in an attempt to become the leader in cloud computing and catch the leader in public cloud infrastructure, Amazon Web Services (AWS). However, amid heavy competition, SoftLayer quickly fell behind, causing IBM to shed the brand and incorporate the acquired control plane into what became IBM Bluemix — a rebranding effort with inconclusive results as it would ultimately become IBM Cloud. Over the past eight years, Rometty has been ambitious in laying out her goals to capture “the big 3” — AWS, Microsoft and Google — yet the market remained skeptical as IBM consistently failed to deliver on its top line and the ability to catch industry leaders was viewed as a pipe dream. In many ways, this prompted the acquisition of Red Hat — a $34 billion bet IBM officially made in July 2019 to take the 80% of customers still operating on premises to the cloud. Microsoft, with its competitive platform know-how through Azure, successfully captured cloud in its infancy by shifting customers’ front-end applications. However, IBM, with the help of Red Hat’s platform, is looking to take customers’ mission-critical back-office workloads to the cloud, in what it deems Chapter 2 of the cloud. This is a competency that has yet to be proven but may hold true under new leadership.

Systems Hardware has been on a cloud-centric pivot for a while, and Krishna is likely to reinforce and cement this transition

TBR believes that from a hardware strategy perspective, the CEO shake-up will have little impact. The z14 and z15 refreshes have focused on positioning the venerable mainframe as a critical gateway into the hybrid multicloud world by building in critical firmware and software features to deliver the mainframe capability with public-cloud-like operating characteristics, enterprise-grade security and data management capabilities. TBR does not see this changing anytime soon.

A new CEO brings promise of stabilization to IBM Services, which has performed inconsistently over the past few years

While IBM’s CEO transition is not strictly tied just to IBM Services, it is a positive move for the services business. Over the past six years, IBM Services’ revenue has been uneven, and has largely been in decline during the past five quarters. Filling the role of CEO with an employee who has been with the company since 1990 and has been instrumental to the development of IBM’s cloud business and the acquisition of Red Hat will likely bring a fresh perspective to IBM and IBM Services, which has been struggling to overcome growth pressures in traditional labor-based services, such as in Global Technology Services and Global Process Services. Meanwhile, IBM Services is experiencing growth in cloud-related activities as the company leverages its technology incumbency to advise, migrate, build and manage clients’ hybrid cloud environments. IBM Services will benefit from IBM’s new public cloud offering for financial services clients, the new IBM Cloud Paks portfolio, and synergies from the Red Hat acquisition as well as the related launch of consulting and technology services offerings for Red Hat and multicloud management. However, such offerings have yet to gain scale to offset lingering growth challenges in traditional services segments.

Krishna’s experience and expertise, including around operations, will help IBM Services continue with its technology-led transformation value proposition and also help overcome execution challenges, which were present during 2019 and negatively affected services revenue growth and profitability. The Cloud and Cognitive Software business, which Krishna is currently leading, has been a growing business; sharing knowledge and supporting the ongoing market trend of convergence between services and software will help IBM Services transform into a growing business.

What to watch going forward

This is as critical a juncture for IBM as when it installed Lou Gerstner from the outside in 1993. In this transition, IBM is splitting the responsibilities between an IBM insider as chairman and an IBM outsider instrumental in building one of the best technology operating models for the new technology era. From this vantage point, TBR will be evaluating and monitoring the following: 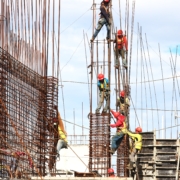 The JEDI contract: We don’t see the force; do you?

Big Nine are building digital ecosystems; cloud, connectivity, platforms and other initiatives all point to this end state