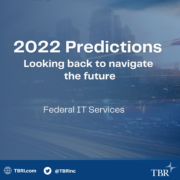 Federal fiscal 2022 (FFY2022) has been a good year for the federal IT market, even as IT spending was somewhat impeded by lingering effects of the pandemic, the rise of macroeconomic inflation, budget uncertainties and delays, and the ongoing disruptions to supplies of computing components.

The Biden administration’s federal IT budget request for FFY2022 was roughly 18% higher than for FFY2021; the actual growth figure will likely be closer to 10% after the final budget is enacted. Cloud-centered IT modernization, cybersecurity enhancement, and accelerating adoption of digital technologies (e.g., analytics, artificial intelligence, machine learning) featured heavily in federal IT outlays in FFY2022 and will again in FFY2023.

Federal agencies are expected to spend over $11 billion on cloud technologies in FFY2022, 30%+ higher than the total value of federal cloud outlays in FFY2021 and 70% higher than cloud spend in FFY2020. Double-digit increases in IT spending are expected across civilian agencies in FFY2023, and spending on defense-related technology will also expand at a healthy pace — with the growth driven in large measure by cloud-related investment.

John: Trepidation about defense spending cuts was largely dispelled by the Biden administration’s budget request of $722 billion for the Department of Defense (DOD) for FFY2022, representing a $17 billion increase from FFY2021. For FFY2023, the administration has requested $773 billion in total defense outlays, including cybersecurity-related spending north of $11 billion, up from $9.8 billion in FFY2021.

In the civil arena, the Biden administration requested $65 billion in IT spend for FFY2023, up 11% over FFY2022, including a similar 11% increase in civil cybersecurity outlays.

Prediction No. 3: Investment in advanced digital technologies will accelerate across all federal sectors

John: Digital solutions will underpin federal IT modernization initiatives, and agency outlays to update and enhance their IT infrastructures vis-à-vis digitally transformative technologies will expand in FFY2023 and beyond.

For example, in June 2022 the Office of Management and Budget and the General Services Administration announced that $100 million will be earmarked within the Technology Modernization Fund (the fund to support to federal IT modernization projects) to improve citizen experience using digital technologies.

The Biden administration’s executive order mandating the expansion of cybersecurity in 2021 drove the aforementioned growth in cyber-related allocations in the FFY2022 budget and will continue to spur accelerating investment to secure federal IT systems in FFY2023. The White House and federal agencies have issued similar directives regarding expanding the adoption of AI technologies across the federal government. The DOD’s Joint Artificial Intelligence Center saw its budget expand from $89 million in FFY2019 to over $278 million for FFY2021.

Federal spending on big data solutions and services was $6 billion in FFY2021 and could surge to nearly $8 billion by FFY2023.

Subscribe today to be among the first to read our 2023 Predictions when they drop next month!

Will IT services revenue grow despite the competitive talent environment? 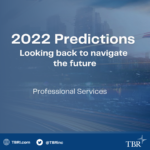 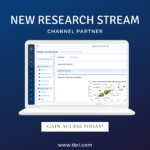