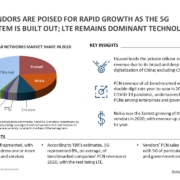 According to TBR’s estimates, 5G represented 8%, on average, of benchmarked companies’ PCN revenue in 2020, with the rest being LTE. LTE remains the de facto technology for PCN, thanks to its maturity and vibrant ecosystem, which has been developed over the past decade. 5G for private networks, on the other hand, remains in its infancy, with key 3GPP Release 16 standards recently ratified, 5G spectrum gradually coming to market, compatible infrastructure commercialized and endpoint devices becoming available in the past year.

The endpoint device aspect of the nascent 5G ecosystem will begin to proliferate over the next couple of years, at which point 5G PCN implementations can be scaled commercially. In the meantime, most of the 5G engagements that occurred in 2020, with the notable exception of those in China, were focused on experiments and pilots, pending the commercial availability of compatible endpoint devices. China has a significant head start with private 5G, with Huawei and ZTE equipping leading entities in the country, particularly the government, with the technology as part of national digitalization-related initiatives. Other developed APAC countries, namely South Korea, Japan, Taiwan and Singapore, are following closely behind China in 5G readiness. 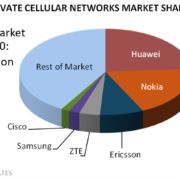 Telecom operators felt the effects from COVID-19 in 1Q20; the impact on telecom vendors will be more pronounced in 2Q20

Timely clearance of mid-band spectrum is essential for U.S. to remain at forefront of global 5G race

U.S. federal IT stalwart Leidos fortifies its foothold in Australia
Scroll to top