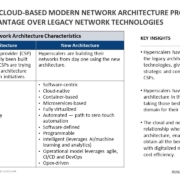 Hyperscalers are reimagining how networks are built, owned and operated

Lockheed Martin forced to abandon $4.4B acquisition
Scroll to top